The Japanese yen has been demolished lately, thanks to the Bank of Japan’s reluctance to join in the global tightening party. There are growing rumors that the Japanese authorities are about to intervene in the forex market, but this does not yet seem like a realistic option.

The yen has taken a hit lately. Central banks around the world are raising interest rates to fight inflation, but the Bank of Japan refuses to play that game. That’s because there isn’t much inflation to fight. The annual CPI rate remains below 1%, defying the global inflationary storm.

In fact, without the chaos of supply chains and soaring commodity prices, Japan would likely still be trapped in deflation. The BoJ knows this, so it is happy to lag behind all other central banks. Hopefully, they might manage to import some of the inflation from abroad and hopefully break the deflationary mindset that has plagued Japan for decades.

But for that to happen, the yen has to suffer. Not only has the BoJ refrained from signaling rate hikes, but it has doubled down on its yield curve control strategy, which maintains a cap on Japanese rates. This means that whenever foreign yields rise slightly, yield differentials automatically widen against the yen since domestic yields cannot join the rally.

This momentum has been on full display of late, with the yen losing 9% of its value against the US dollar so far this year. The country’s reliance on imported energy and commodities hasn’t helped either.

Conditions for intervention not met

In a nutshell, the situation is not yet bad enough to warrant FX intervention. Past intervention cases were generally coordinated with Europe and the United States, calibrated to prevent excessive appreciation of the yen.

Now that the yen is falling, one wonders if the Europeans and Americans would play along. They would weaken their own currencies so that the yen would strengthen, exacerbating inflationary pressures in their own economies.

This is highly unlikely as the decline in the yen was orchestrated by the BoJ and could help boost Japan’s export-oriented economy. So, if there is intervention, it will probably be Japan doing it alone, burning up its foreign exchange reserves. 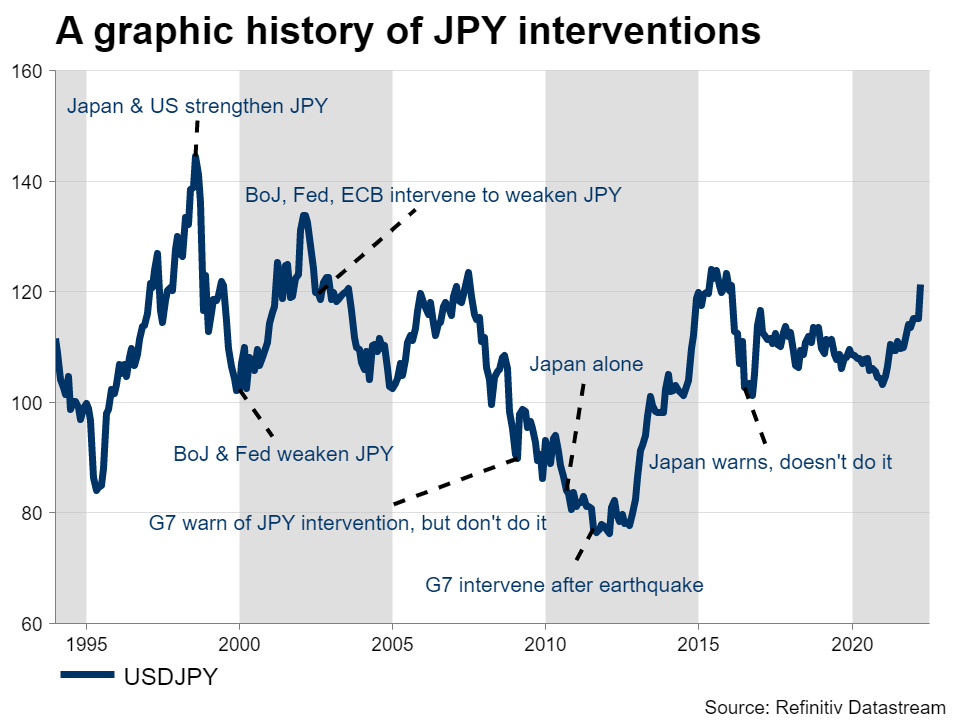 It looks like the “line in the sand” is the 130 level against the US Dollar. Several reports suggest that the likelihood of intervention would increase significantly if the yen breaks above this level, although the speed of the move is also crucial. A slow drop is nothing to worry about – a hard drop is.

The clearest sign that intervention is imminent would be if the Japanese authorities describe the movements of the yen as “one-sided” and “disorderly”. If that’s not enough, expect to see “leaked reports” that the BoJ is calling major interbank brokers to check yen prices. These jaw techniques are usually enough to stop market momentum without the need for action.

The final step would be a formal warning to intervene from the Minister of Finance. We are far from this step.

What else can stop the bleeding?

One way to stop the fall of the yen would be a ceasefire in Ukraine. Good war news would help cool commodity prices and, by extension, calm inflationary pressures, causing market participants to reverse their bets for aggressive rate hikes by foreign central banks.

Money markets are currently pricing in another nine-quarter rate hike from the Fed this year. If all of a sudden it looks like inflation is peaking, that number could be reduced and US yields could fall, triggering a relief rally in the battered yen. 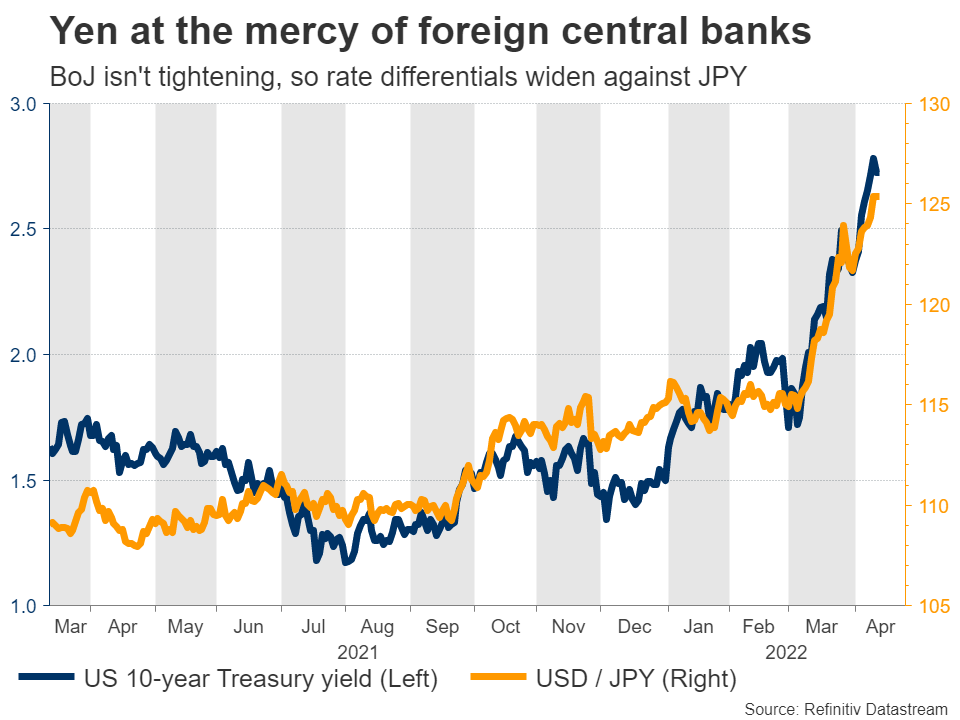 Similarly, if China were to abandon its “zero covid” policy, there would be less concern about struggling supply chains that are keeping inflation high, which could also lead investors to unwind some upside bets. rates. Another solution would be an implosion in global equity markets that would trigger safe haven demand for the yen.

Any of these events may be enough for a relief rally, but not for a trend reversal.

The trend depends on the BoJ

For a trend reversal, the Bank of Japan needs to turn around and signal that it will tighten policy. Until that happens, the overall outlook for the yen remains negative.

The first step in the normalization process would be to widen the range in which Japanese yields are allowed to trade, essentially raising the cap. With the economy improving and inflation finally picking up steam, that could happen as early as this summer. 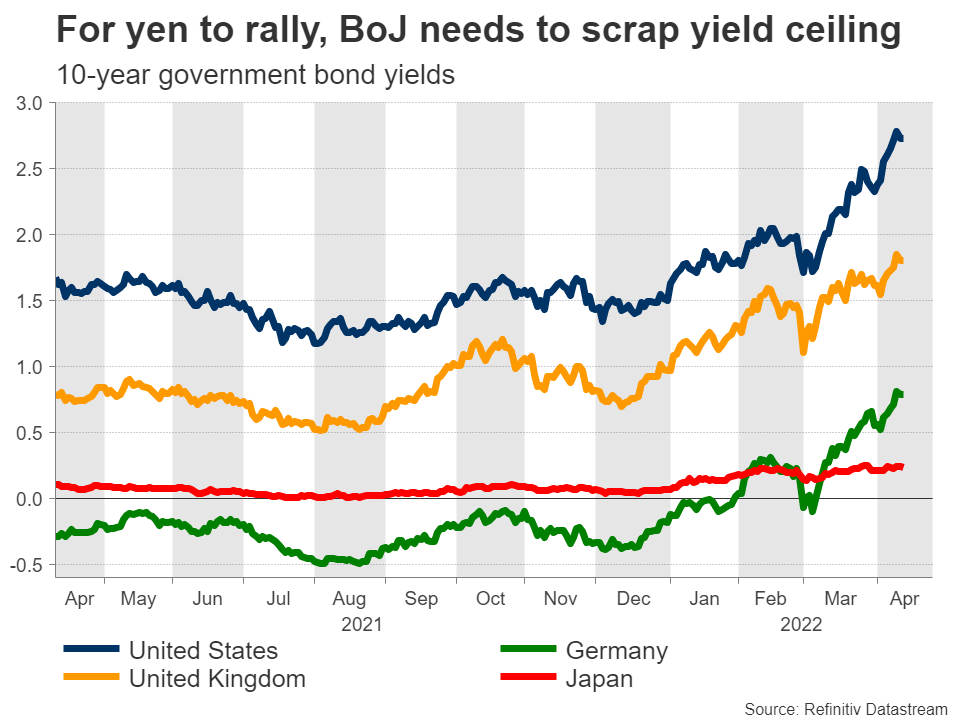 The next step would be to completely let go of yield curve control and signal that higher rates are on the horizon. This is probably a story for the end of the year or the beginning of next year, but if it also coincides with the “peak of inflation” in foreign economies, there could be a staggering reversal. of the yen.

Until then, any attempt at recovery could remain relatively superficial.